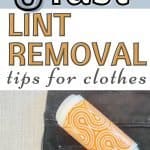 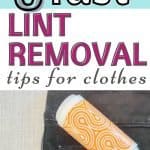 THE LINT BATTLE IS REAL

You put on your nice black pants only to look down and notice they are covered in lint.  What happened?  You just washed them.  Why do they have so much lint on them?  Don’t panic, all you need is a good lint remover and you will be ready to go.

Related Post: How To Use Dryer Balls In Your

There are sponsored links on this page from which I may get a commission at no added cost to you.  For more information, please read my Privacy Statement.

As a mom who does what feels like 5000 loads of laundry a year, I am no stranger to lint.  As a matter of fact I can tell you plenty of stories about clothing I have actually ruined by washing them with the wrong things and causing too much lint to even remove.

But over the years I have learned the tricks and I now know how to both prevent lint from getting on your clothes, and the best lint removers for when you just can’t avoid that dreaded lint.

WHAT CAUSES LINT ON CLOTHES?

Lint on clothes can come from a few different places.

WHEN TO USE A LINT REMOVER

A lint remover can be used in just about any one of the situations listed above.  Lint removers are made many different ways so you really just need to find one that you like.

The only time I have found that I cannot use a lint roller is in the instances where I have washed a piece of clothing…like stretchy workout pants with a brand new fluffy blanket or piece of clothing that sheds really, really badly.

In this case, I did my best, but really the clothes were kind of ruined.

HOW DOES A LINT REMOVER WORK?

How a lint remover works just depends on what type you buy.

One type is a roll of tape that you just roll up and down the area of clothing that is covered in lint.

Another type is a brush that you run in one direction (against the brush grain) to remove lint from clothes.

And yet another type is electric or battery powered.  Where a small spinning blade is present under a protective covering that literally cuts the lint off your clothes.

You can also try a metal shaver which is a hand held blade that you run along clothing or fabric.

And the last thing you can try is using these dryer sheets to help the lint not stick in the first place.

Not all lint is created equal.  Some lint is big and bulky, some is fine and silky, and yet some creates little balls on your clothes that seem to be attached.  And there really is a perfect lint remover for each type of lint.

Read the following descriptions to choose the right lint remover for your lint.

This electric Conair lint remover is the best lint remover according to amazon. It is a top seller and make it great for the fuzzy or bally kind of lint you find on your clothes.

The best lint roller for clothes has to be this one made by Scotch-Brite.  Leave it to the leaders of clean to know how to make a lint roller that is sticky enough to remover most lint.  Lint rollers that are sticky are best used on both larger bulky lint that comes off your clothes easily when you pull on it (meaning it is not hard to pull off with your fingers) and also lint that is really fine and small.

These metal lint shavers are not actually sharp razors, but instead have something like a coil around the action end of the handheld device.  When you run it over fabric, the lint gets trapped in the little coils and is pulled from the fabric.  This kind of remover for lint is best used on lint that is hard to pull off with your hand because it is attached well to the fabric.  It will also work well with the little balls that you sometimes see on fabric and can be caused by lint.

5//  The Best Dryer Sheets For Lint Prevention and Removal

While I am not a big fan of using dryer sheets, these dryer sheets are the #1 purchase for lint removers on Amazon.  The way they work is to prevent the lint from happening in the first place, thought they do that by adding waxes and conditioners to your clothes that help the lint “slide” off.  Dryer sheets like these are best used to prevent lint from getting on your clothes in the first place and would probably work on any type of lint.  If you want no more lint, this may be the option for you.

Related post:  3 Dryer Sheet Alternatives That Are Healthier For Your Family

HOW TO REMOVE LINT FROM CLOTHES

How do you get rid of lint?

Lint can come from soft fluffy clothes you are washing along with other clothes.  It can come from rubbing up against rug or piece of furniture that sheds, or it could come from something you are currently wearing.

How do I get lint off my lint brush?

One of the best ways to get lint off of a lint brush is to just pull the majority of it off and throw it in the garbage.  If there is still some left over, run the lint brush under water and rub it with your fingers until all the lint is off the brush.

How do you remove lint without a lint remover?

One way you can try removing lint from clothing without a lint remover is with a heavy duty tape.  Something like masking tape or duct tape will if you dab it over your clothing where the lint is.  Once the tape is no longer sticky, throw it out and get a new piece of tape to use to remove the lint.

What removes fuzz from clothes?

There are many things that remove fuzz from clothes including lint rollers, electric lint removers, fabric shavers, and metal lint removers.

What is the best fabric shaver?

According to Amazon, the best electric lint remover, with over 74,000 reviews and a 4.5 star rating is this electric shaver by Conair.

How do you get fluff off black clothes?

The best way to get lint off black clothes is either with a tape lint roller or a lint brush. If you do not have either of those, you could use duct tape, masking tape, or packaging tape.

Why are my clothes covered in lint after washing?

There are two reasons your clothes may be covered in lint after you wash them.

The first reason is that your washer drain line may be clogged.  When this happens, the dirty, lint filled water does not expel from your washer drum fast enough and the slow drain causes the lint to be re-deposited onto your clothing.

The second way you may be getting lint on yoru clothing is by washing your regular clothes with clothes that are extremely fluffy and soft.  I like to reserve these soft fluffy clothes that seem to shed more than regular clothes and wash them in a separate load with just other fluffy things.

Drying will remove some lint, but not all lint.   And sometimes if you have washed your clothes with other really soft fluffy clothes that shed a lot and easily, your dryer probably will not remove all the lint.  You can purchase these Bounce dryer sheets to help remove lint while drying your clothes.  But a better option is to be preventative and not wash your clothes with clothes that are soft, fluffy, and more prone to shedding.

Why do black clothes attract lint?

Black clothes do not actually attract more lint than any other color of fabric.  Many times it is just that most lint comes from fabric colors that are lighter than black and therefore show up more on a black fabric.

P.S. – Want to refer back to this post? Remember to Pin it!

The Best Reasons To Use White Vinegar In Your Laundry

Dryer Sheet Alternatives That Are Safer For Your Family’s Clothes

As a stay at home mom myself, I have found ways to keep myself sane and organized while loving what I do …be home with my kids!  After 14 years of being home, I realized other moms may benefit from some of the tips and tricks I have learned over the years.  Join me to learn ways to manage your home and life as a stay at home mom so you can make time to enjoy the best part…family.  Things I love…feeling motivated, Harry Potter, being outside, and digging deeper into my life and my family’s life in order to make it better.  I have a Degree in Biology and am also a freelance writer.

As a stay at home mom myself, I have found ways to keep myself sane and organized while loving what I do …be home with my kids!  After 14 years of being home, I realized other moms may benefit from some of the tips and tricks I have learned over the years.  Join me to learn ways to manage your home and life as a stay at home mom so you can make time to enjoy the best part…family.  Things I love…feeling motivated, Harry Potter, being outside, and digging deeper into my life and my family’s life in order to make it better.  I have a Degree in Biology and am also a freelance writer.